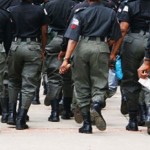 Habits are very difficult to break, they say. This is very true of about eight officers of the Police Mobile Force, Eleven Squadron, Calabar, Cross River State, who have been arrested between Akwa Ibom and Cross River States by another team of Mobile Force deployed from the Force Headquarters, Abuja, for allegedly mounting illegal roadblocks and improper dressing.

It will be recalled that the Inspector-General of Police, Alhaji Mohammed Abubakar had, upon assumption of office, disbanded all roadblocks by policemen. Subsequently, a team of mobile police officers was constituted to monitor the compliance of the IG’s directive. The team was mandated to arrest any officer that defied the directives.

One of such teams, led by the Commander in charge of Ethics, Doctrine and Monitoring, Mr. Anietie Eyo, arrested three mobile policemen who allegedly did not obey the directives of the IGP in Uyo, Akwa Ibom State capital. On their way to Cross River State with the arrested culprits, the team again arrested two mobile policemen who abandoned their beat at the National Independent Power Plant, Odukpani to mount illegal checkpoint along the Calabar-Itu expressway.

Mixed feelings have trailed the withdrawal of the police personnel from the country’s highways. However, it seems that the majority of road users prefer them off the highways as they cause more trouble than they solve. And that is besides the extortion which they carry out on the highways.