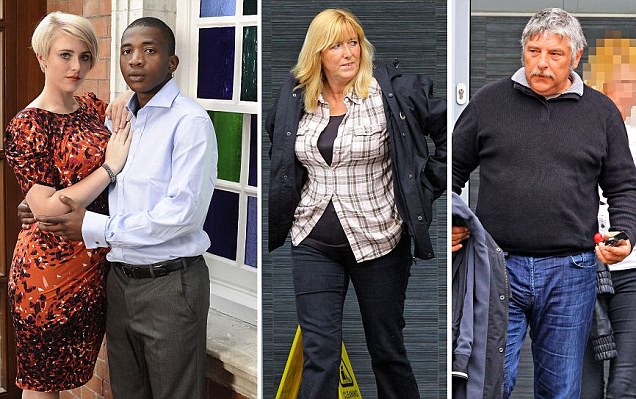 A RACIST couple have been jailed for violently attacking their daughter and her new boyfriend because he was black.

Another case of racism looms as David and Frances Champion lashed out when they saw 17-year-old Jane “in a state of undress” with waiter Alfonce Ncube.

At thesame time it was said that 50year old Champion  hurled racist abuse at Mr Ncube before grabbing and kicking him as he threw him out of the house.

He then pulled his daughter’s hair and hit her as he pushed her out of the door. Jane went to her nan’s but returned when things had calmed down.

However a court heard how violence flared again a month later when Champion and his wife came home from the pub.

Prosecutor Nicola Powell said: “David Champion asked his daughter if she was still seeing Mr Ncube. When she told him she was, he punched her in the face. Her father then grabbed her by her throat and continued hitting her.”

His wife, 47, told her daughter: “You deserve it, it is all your fault.” She started hitting Jane, now 18, leaving her with swelling to her face and lumps on her head.

The couple, from Swansea, also stormed into the restaurant where Mr Ncube worked but he had gone “into hiding”.

Champion was jailed for 12 months and his wife was caged for nine months after admitting the race-fuelled attacks.

Judge Peter Heywood told the pair at Swansea Crown Court: “Your behaviour was disgraceful. We live in a liberal and enlightened society and these sorts of racist behaviour cannot be tolerated.”

In 2009 Champion covered his face at a rally in Swansea for the Welsh Defence League. The group were led away by cops.