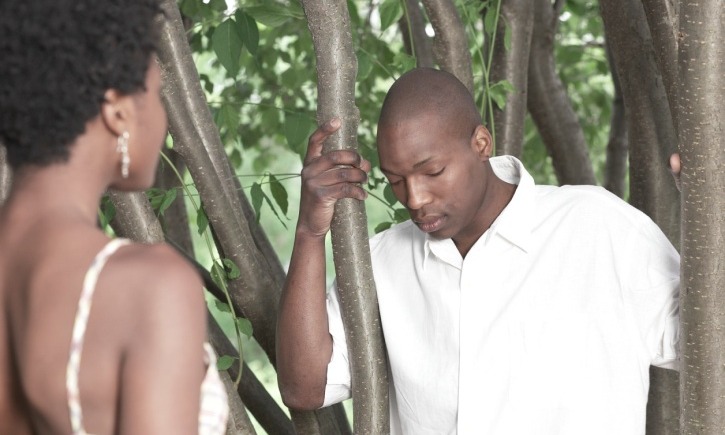 He heard what you said. He’s just not interested in hearing it at the moment. Don’t try to give your man instructions or talk about your feelings when he’s watching TV (especially sports), eating, reading, or has just come home from work. He will only be half listening. His mind is on other things like: will his team win, his day at work, how hungry he is, etc. He can only pay attention to one thing at a time. If he lets you think that he is giving you his full attention, and then you will want to talk to him at these inappropriate moments all the time. If he gives you a detailed response, you’ll just continue to talk. If he completely ignores you, you’ll get mad. If he pretends that he is listening, you will be content and walk away.

Not because he wants to cheat, but because men are visually stimulated. Getting mad at him for looking is just going to make him sneak a peek. Hey, it’s just a passing glance. It’s not like we don’t check guys out too!

Men need time to reflect, socialize and just get away from it all. Men like the time to regroup. It doesn’t mean that they don’t want to be with us, it is just an escape to appreciate what they have at home. So lighten up, while he’s out of the house, take the kids out or get a babysitter and go something you enjoy.

You’ve probably asked him to do something several times, but yet he still doesn’t do it in a timely manner. In frustration, you do it yourself. What is he thinking, “Thank Goodness!” Men do things at their own pace. You can ask your man to take out the trash and 3 hours later, it’s still there. Technically, he still has time to take out the trash. In his mind, the trash isn’t going anywhere anytime soon, and if you do it yourself, that just makes it better for him.

If your man overhears you gossiping on the phone, he’ll probably shake his head in disapproval. However, if he talks about Joe and Margaret, his co workers who are having an affair, it’s not gossip. Actually men enjoy to gossip. They just have a different name for it “Commenting.”

If you ask your man, “What You’d Do Today?’ and he replies “What I’d Do Today?” he’s probably thinking of lie. It doesn’t mean that he did something inappropriate, just something you wouldn’t approve of. Maybe, he left work early to hang out with the guys. If he told you this, you’d be upset because you had a long day at work or at home with the kids. The problem is he was having too much fun to think about if you would ask him that question, so he didn’t plan a lie beforehand.

Admit it, you see your man sitting quietly and you naturally assume something is wrong or has happened. So you ask, “What’s wrong?” and he replies, “Nothing, I’m just thinking.” Well, this answer doesn’t satisfy you, so you ask again throughout the day, which leads to his frustration. Men reflect too! He was probably thinking about how he wants to change careers, if you are satisfied and happy with him, how he can make more money, how he doesn’t want to grow old and fat, or how he would really like to buy that sports car. Ask him once, and then leave it alone. If you really sense something is wrong, give him some time and talk to him when you both feel like talking.

You just told him about your horrible experience at work. You want him to comfort and console you; instead he gives you logical facts about how to solve the problem. You feel cheated. You wanted to share your feelings about the day and all he wanted to do was fix the problem. Men like to offer solutions. Most men are not concerned about being in touch with their feelings when there’s a conflict. You want to feel understood; he wants to make the problem go away. He can’t relate to how you are feeling, so he does what he knows best, helps you to plan a solution.

A man needs to feel he has accomplished something in life, and often times that accomplishment is found in their jobs or careers. Men don’t like to feel conflicted between work and quality time with their families. To men, if they are working hard to earn money, this will improve the quality of their family’s life.