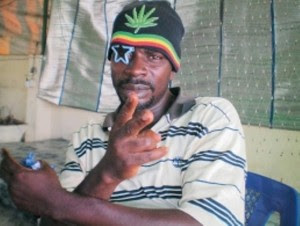 Popular musician, Friday Igwe aka Baba Fryo, has threatened to sue the Nigeria Police Force for serious injuries sustained from an assault by five policemen in Lagos.
Fryo, who spoke from his hospital bed on a radio station in Lagos, Wazobia FM on Wednesday morning, said he was beaten by the five policemen at Iyana Ishasi, a suburb of Lagos some days ago when he tried to appeal to them to stop manhandling two young ladies.
The musician said the incident happened on Tuesday after the two girls had rebuffed entreaties by two policemen to follow them to an unknown destination.
He said the two policemen went to get five colleagues of theirs and pounced on these girls, hitting them viciously with guns, batons and boots.
When he heard the commotion from his room in his friend’s hotel, he said he moved to the scene to find out what was amiss.
He stated that when he begged the seven policemen to stop beating the girls, one of them turned to him and gave him some hot slaps.
Within seconds, four others joined in beating him, leaving him with fractures.
He said when he reported the matter to the DPO of a nearby police station, he sympathised with him.
But Fryo said he was taken aback when no mention was made of who would bear the cost of his treatment.
He vowed that he would sue the police if nothing was done about the matter, noting that a scan had confirmed that he sustained a fracture in one of his legs.
Baba Fryo is widely known for his hit track – Dem Go Dey Pose.
When our correspondent reached the spokesperson for the state police command, Ngozi Baride, for comments, she was said to be in a meeting.
She did not also respond to an SMS sent to her mobile phone.
Naijahottestgist
AdvertisementABUJA DOCTOR REVEAL THE UNIQUE WAY TO PERMANENTLY CURE WEAK ERECTION, SMALL AND SHAMEFUL MANHOOD AND INFERTILITY ISSUES WITHOUT SIDE-EFFECTS WITHIN SHORT PERIOD!! DON'T BE A VICTIM!! Click Here for More Details