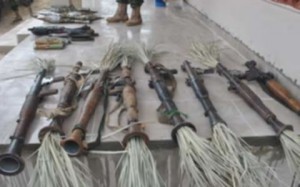 As the Eid-el-Fitr celebrations get into top gear, threat text messages in circulation have thrown Bauchi residents into panic, with security agents on the alert. According to unconfirmed sources, text messages warned of invasion of the state capital by Islamists at the prayer to end Ramadan with bombs and guns.

One resident, Abdullahi Magaji, who lives in Doya, showed a text message sent to him by somebody he did not know. The text read:

“Asalaamailakun. This is to inform you that our people will be in Bauchi to celebrate the Eid el Fitr along with you with our guns and bombs either Saturday or Sunday.Be sure you receive our people . Salaamuailaikum’’.

Other people have also reported that they have received similar messages from people they do not know. The messages were said to have displayed neither a name nor number.

Meanwhile, security agents have stepped up checks on motorists and pedestrians in Bauchi State ahead of the end of Ramadan prayers. Security patrols were intensified especially in densely populated areas of the Bauchi metropolis and the suburbs of Yelwa (crisis prone area), Bayara, Guru, Wuntin Dada, and Tsohon Kanfani, along Bauchi -Jos Road.