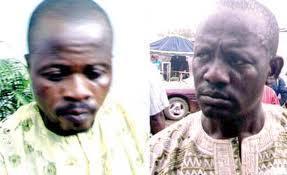 The suspects Fatai Bamidele and Lateef Ahmed, allegedly paraded themselves as Muslim clerics to defraud innocent members of the public of their money.

They were said to have allegedly operated a shrine in Ilorin in Kwara State and they took victims to the shrine where they were made to take an oath not to reveal what had happened to them to others.

Parading the suspects before newsmen in Lagos yesterday, Commissioner of Police in charge of SFU, Mr. Tunde Ogunsakin, said the fraudsters were arrested based on a petition by some victims about their criminal activities.

The petitioner, according to him, alleged that sometime in October 2011, one Lawal Suleiman collected his goods (fireworks) valued at N13, 320, 750.00 with the promise to pay as soon as the goods were delivered. The goods were delivered successfully but the suspect refused to pay, he said.

He said Fatai Bamidele, 34 years old from Kwara, claimed to be a Muslim cleric who normally assists Lawal Suleiman in his spiritual life. “Lawal Suleiman came to him to seek special assistance concerning the bad dream he had and also that he needed more power and more money”, he added.

The request for more money, according to him, prompted him to introduce him to one Alhaji Lateef Ahmed in Ilorin who happened to be his master and superior.

“So he informed Lawal that they have two types of money rituals: there is the one brought by ghost and the other type from daily contribution,” he added.

He said Lawal opted for daily contribution and at the end of it all about N10 million was allegedly obtained from him so far before the police swooped on them.

The commissioner said it was discovered during investigation that of the N10 million Lateef gave his colleague in crime, Bamidele, N2.5 million while he took the remaining N7.5 million.