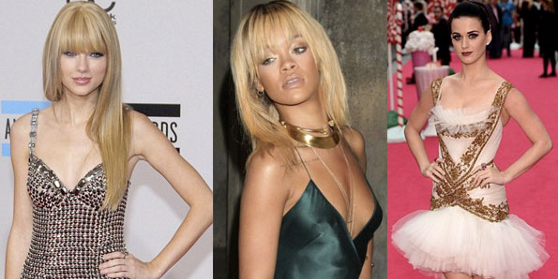 Every year, Forbes comes out with their list of the 100 Most Powerful Celebrities. Here are the top 10 of 2012 counting down; you won’t believe who’s no 1.
10. Steven SpielbergWorth $130M, Spielberg is having a strong year. He has four new shows debuting, including Terra Nova and Smash, and he’s back in the directors chair with Oscar nominated films The Adventures of Tintin and War Horse. Click to continue with the list…

9. Tom CruiseCruise is worth a cool 75M and popped back onto the top 10 list this year thanks to Mission: Impossible – Ghost Protocol, which earned $700 million at the global box office. He’s also just ended his 7-year marriage to actress Katie Holmes, so we’ll have to wait to see if that impacts his ranking for 2013.

8. Katy PerryAs one of only two musicians in history (the other was the late Michael Jackson) to have five No. 1 singles all from the same album, Katy is having an awesome year and is currently worth an estimated 45M. Not bad for a girl who just got divorced late last year. Her California Dreams Tour grossed nearly $60 million.
7. Kim KardashianThe woman who made “famous for being famous” a career is worth 18M. She graced more than 63 magazine covers in the past year alone, thanks to her infamous wedding and then post-haste divorce proceedings. Contracts like her Keeping Up With The Kardashians TV show, namesake fragrance, and clothing line for Sears keeps her in the green.
6. Britney SpearsBritney’s public meltdown is like so 2007. She blasted back to the top last year with over 75 shows in one year. In addition to earning millions from endorsements and a fragrance line, she netted a 15M payday with the show X Factor as a celebrity judge. As of May 2012, she’s worth 58M.
5. Lady GagaJust dance, Lady Gaga! You’re worth 52M and the world’s most popular Twitter user! Although Lady G fell from her #1 slot last year, she’s still making a killing off music sales.
4. Rihanna Drama seems to follow the Barbados-born beauty wherever she goes, but something must be working for her because this is her first time landing on Forbes list. Worth 53M (also the number of her Facebook fans–she’s second only to Eminem), she completed 85 shows over a 12 month period. Hard-working girl!
3. Justin Bieber If looking at this kid’s resume makes you feel like your teen years were wasted, you’re not alone. Just 18 years old, Justin has sold over 12 million albums since his 2009 debut. His breakout balladBaby is the most-watched video in YouTube history, and he’s funding start ups including Enflick, Tinychat, and Spotify. And, let’s face it–with 55M he can afford to!
2. Oprah WinfreyYou may not be surprised to see her in the top 10 list, but if you were expecting to see her in the #1 slot, you haven’t been following the news. Although she’s still worth 165M (more than anyone else on the top 10 list) Winfrey has lost a staggering $125 million since last year. After ending her 25-year syndicated show she’s faced ratings disappointments and financial issues with her cable network OWN since it premiered in Jan. 2011. Here’s hoping 2013 is better year for her.
1. Jennifer LopezShe may just be “Jenny from the Block,” but Lopez is on fire this year with a new boyfriend, an upcoming world tour, three new movies, and a growing portfolio of endorsements.