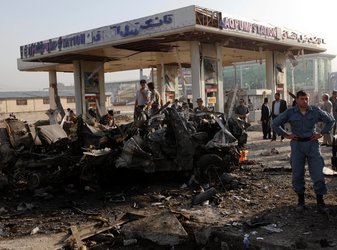 As the latest fallout of the protests against the movie which has widely been described as anti-Islam, a female suicide bomber in Kabul, Afghanistan on Tuesday has killed 12 people. This attack has been described as the deadliest single attack claimed to avenge the film that has sparked a week of deadly protests across the Muslim world.

Also, the attack brings to more than 30 the number of people that have been killed in a violent backlash over the film titled “Innocence of Muslims.” According to Security officials nine foreigners, including eight South Africans, were among those killed on a major highway leading to Kabul airport and close to a wedding hall when the bomber blew her station wagon up alongside a minivan carrying foreign workers.

Meanwhile, Hezb-i-Islami, the second largest insurgent group after the Taliban who have been fighting US-led troops and the government for 10 years, claimed the attack. According to their spokesperson, Zubair Sidiqi, who spoke with AFP in a telephone conversation from an undisclosed location, “The bombing was carried out by a woman named Fatima. The bombing was in retaliation for the insult to our Prophet,”

Also, according to the British Broadcasting Service, the victims were refueling their van at a petrol station close to Kabul International Airport, when the suicide attacker rammed a vehicle into the van.