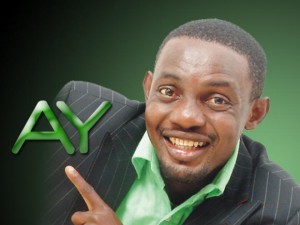 Multi-talented and award-winning comedian, Ayo Makun popularly known as AY screened his new situational comedy(sitcom) at the Nollywood Film Festival in New York last Saturday.
The sitcom is a weekly 30-minute TV series that addresses contemporary issues projected through the comedian’s experiences as a stand-up comedian and also as a bachelor.

The comedian co-hosted the Nigeria Entertainment Awards in NY the same weekend he screened his sitcom. He siad he wasn’t sure how the reception would be when he started AY’s crib, but to his surprise, the sitcom received a standing ovation at the end of the screening. Asked when his fans should expect the sitcom, the comedian said it should be out by October.