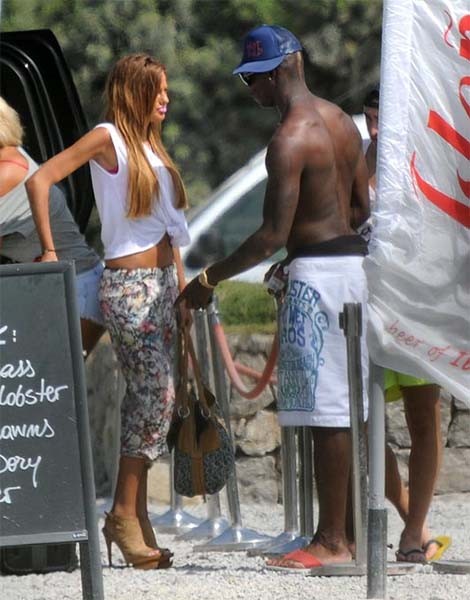 Mario Balotelli has had another bust-up with boss Roberto Mancini over his lifestyle.

The Manchester City striker was left out of the squad for Tuesday’s Champions League defeat at Real Madrid.Mancini is fed up with Balotelli’s wild ways – including his smoking habit – and is fast losing patience with the maverick Italian.

Balotelli partied until the early hours after Saturday’s 1-1 draw at Stoke. He was pictured with boxer Amir Khan on a night out at Circle Club in Manchester.

Mancini was angry as he wanted Balotelli to rest after the Stoke match ahead of their opening European match against the Spanish giants.

As a punishment, Balotelli was forced to travel to the Bernabeu despite being told he wouldn’t play a part before stepping on the plane.Another growing concern for Mancini is Balotelli’s smoking habit – infuriating for a club that pay him over £100,000 per week.

Although it is not known just how much Balotelli smokes, he has regularly been pictured puffing on a cigarette away from his job.

Mancini has been left frustrated at Balotelli’s refusal to have counselling sessions or hypnosis to help kick the habit.

A source told the Daily Star: ‘Mario Balotelli is in the bad books on two fronts – a very late night out after the Stoke game and his refusal to stop smoking. He and Mancini had words on Monday afternoon and it led to him being dropped from the squad.’

Despite Balotelli’s long list of mistakes, Mancini has kept faith with a player he regards as one of the world’s best.

Since arriving from Inter Milan in a £24million deal in 2010, Balotelli has regularly caught the headlines for all the wrong reasons.

As well as being a regular on the Manchester party scene, he also caused a fire at his house after friends let off fireworks in a bathroom.

It now appears that Mancini is slowly coming to the conclusion that he may be better off without Balotelli.