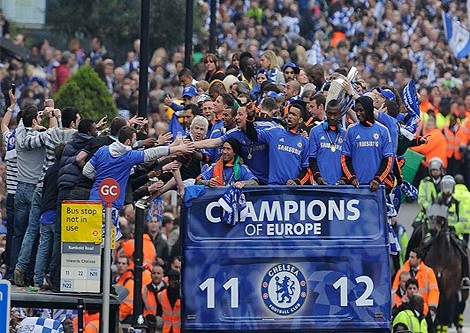 The Blues received the award from their peers after a season in which they won the Champions League but finished sixth in the Premier League – their lowest domestic position since Roman Abramovich took over at Stamford Bridge.

They beat Spanish giants Real Madrid and Barcelona to the accolade on a night that saw four clubs honoured.

The association said the awards, introduced in 2010, aimed to “reward outstanding club performances, encouraging best practice and highlighting successful club management”. Chelsea’s award cited the club “for their outstanding achievement during the 2011-12 season on a European and domestic level”.

Cypriot club APOEL won the Best Sporting Progress 2012 award “for their significant progress in European competition in the 2011-12 season”, while Sampdoria were given an award for the year’s Best Achievement – setting up a “Fair Play Village” in which rival supporters could socialise.

A Shakhtar Donetsk programme designed to help orphaned children in Ukraine, a country with a high number of orphans, won Best Community and Social Responsibility Programme.