Ever wondered what a Cristiano Ronaldo kiss would look like? Stop acting like you don’t wanna know otherwise why are you reading this? Interested, eh? Its not every time we get to see one of the best players in the world kissing in public so this should be news.

Although the Real Madrid henchman has voiced his unhappiness with his current team recently, he certainly seems a lot happier off the pitch.

The 27-year-old striker was seen being cheered up by his stunning girlfriend Irina Shayk, as the pair enjoyed a passionate PDA (FYI, Public Display of Affection) in the stands while his team mates were running rings around Millonarios in Madrid.

The pair gazed longingly at each other, before Ronaldo swooped in for a kiss and ended the amorous display with a huge grin on his face.

Ronaldo and Irina failed to keep their hands off each other, and looked more interested in cuddling up to each other rather than watching Real take on an invited team in memory of the team’s late president Santiago Bernabéu.

And even when the pair weren’t indulging in some PDA, they kept themselves busy by looking at their mobile phones. 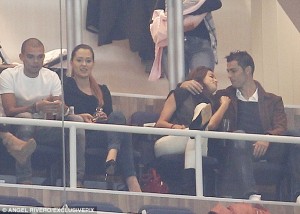 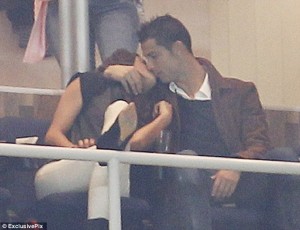