Home Metro News Dana Airline is one of the best airlines in the country today...
Facebook
Twitter
WhatsApp 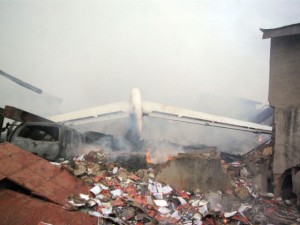 In spite of the various controversies trailing the suspension of the ban on Dana Air by the Federal Government, information emerging from the Minister of Aviation, Mrs. Stella Oduah, has the government stating that Dana was indeed banned in error. According to the minister, the ban was against global aviation practices.

Mrs. Stella Oduah, gave the explanation during an interview session on Channels TV. According to her, the best the FG could have done then was to isolate the particular aircraft involved in the crash and carry out the necessary investigations.

According to her, “a firm cannot be indicted until the results of investigation are released… Rather than indict it (Dana), the result clearly showed that the airline is one of the best in the country today.

“There is no perfect firm or organisation and that is why we started with institutional reform starting from the Nigerian Civil Aviation Authority… Dana is not a perfect company by any means just like any other firm… Dana’s manuals, log book and administrative policies are all in compliance with the NCAA rules and regulations. We’re satisfied that thorough investigation was carried out and that was why we said they can go back to work.”

Well, there we have it. We might get angry all we want. But the minister might be right; Dana might indeed be one of the best airline operators in the country today.