Falconets Fall for USA, to Meet Either Germany or Japan for Third Place Match 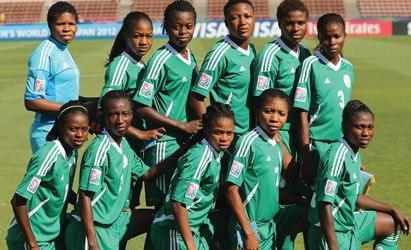 Nigeria’s representatives in the on-going FIFA U-20 Women’s World Cup in Japan succumbed to superior tactics as they lost 2-0 to their counterparts from the USA in a semi-final fixture on Thursday. The Falconets had all the possession – about 60% – but did not make anything of it, eventually allowing the USA team to capitalise on two defensive blunders to make win the game.

As early as seventh minute the Falconets had the first chance to take the lead but leading goal-scorer, Francisca Ordega hesitated with just the goal keeper to beat. Thereafter the Americans stepped up the tempo and won a series of corner kicks which were not well defended by the Falconets but they got away with it.

The Falconets however continued to press forward with Ngozi Okobi making good runs from midfield but there were no beautiful finishes from the strikers to complement the runs. The Nigerian defence was then caught napping in the 22nd minute when an innocuous cross from deep midfield was poorly defended. USA’s Morgan Brian easily headed past Nigeria’s goalkeeper, Ibubeleye Whyte, to make it 1-0 to the US.

The Falconets responded with relentless, but futile efforts which they carried on into the second half, pressing for an equaliser. Their equalizer would have come in the 52nd minute when Okobi’s through ball was dispatched by Desire Oparanozie but she was correctly ruled off-side. The Falconets should also have equalised seven minutes later when Okobi burst into the American box and laid on a pass which Oparanozie blasted over the bar from six yards.

While the Falconets kept the pressure on upfront, lack of concentration at the back cost them dearly when in the 70th minute US’s Kealia Ohai scored the second for the Americans, and the Falconets just could not recover. Nigeria now waits for the third place match where they will face either Germany or Japan.