Contrary to denials by presidential spokesman Reuben Abati, and the bare faced lie by Dame Patience Jonathan’s spokesman, Ayo Osinlu that the first lady is only “resting” in a foreign country, it has been revealed that the First Lady, Mrs Patience Jonathan, has undergone surgery in a German hospital for ruptured appendicitis. According to THISDAY sources, she was flown out for medical treatment over a week ago.

Mrs. Jonathan was said to have been accompanied on the trip by a medical personnel from the Presidential Villa, and a few of her aides.

THISDAY gathered that the decision to fly her abroad followed her deteriorating health condition in Abuja, after she was initially treated for “food poisoning.”

It was learnt that Mrs. Jonathan, shortly after returning from a trip to the United Arab Emirates (UAE), took ill, prompting the invitation of the First Family’s medical personnel to attend to her. She was said to have been treated for food poisoning for four days, “but her condition kept worsening by the day,” the source said.

By the fifth day, President Goodluck Jonathan was said to have yielded to the suggestion that she be flown abroad for “thorough treatment.” It was not certain if the inability of the president’s doctors to treat her was because of faulty diagnosis or insufficient facilities. 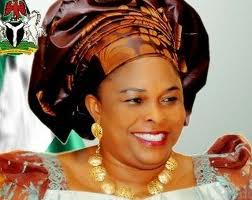 According to the source, “the trip was therefore hurriedly, but discretely arranged, after a German hospital, suspected to be Horst Schmidt Klinik in Wiesbaden, Germany, had been contacted”. By last weekend, she was said to have regained “full consciousness” on her sick bed and was willing to return home.

THISDAY checks, however, revealed that the hospital authorities are insisting on her full recovery before discharging her.

“They say she has to be completely stable before she can be discharged, because they are still observing her, although the worst seems to be over now,” the source said.

When contacted, Special Adviser to the president on Media and Publicity, Dr. Reuben Abati, said he was unaware of the first lady’s condition.

Similar efforts made to reach the first lady’s spokesman, Mr. Ayo Osinlu, were unsuccessful as he did not pick calls to his phone nor respond to text messages sent to him.

We wish her speedy recovery and safe return back to the country, on her feet. Sadly, an unknown number of Nigerians have died probably from the same symptoms as a result of either inadequate medical facilities or improper diagnosis. If medical doctors of the first family couldn’t detect the major cause of her illness after four days or the facilities to carry out proper checks on the first lady and possibly treat her in the villa are unavailable, it tells you just how precarious our situation is- as a country, and as a people.