One would have thought that following the global backlash, riots and even deaths that trailed the release of a highly controversial & anti-Islamic movie, people will learn to be careful and tread softly on dangerous grounds but no, they don’t!

Stefani Germanotta popularly known as Lady Gaga is no stranger to hitting the headlines with her usually outrageous and revealing outfits. Infact, in that department, controversy seems to be her middle name. Strangely enough though, even when she covers up, she still courts controversy.

The 26-year-old singer covered everything but her eyes in the outfit, which saw Gaga wear a pale pink jewelled headdress, brown silk scarf around her mouth and a large coat-like ensemble adorned with fur tails.

In addition to drawing comparisons to a burka – the full body veil often worn by Muslim women – Gaga was also recently slammed by animal rights charity PETA for wearing fur, who are unlikely to be happy with her most recent ensemble.

Earlier this week, Gaga sparked a backlash amongst her usually devoted fans by defending her right to wear fur.

Animal furs, I don’t have a problem with but her dressing or maybe it’s nothing and I’m just unnecessarily worried but then, one can’t be too worried this days as such non-issues have turned out to spark outrage. Who still remembers Nicki Minaj’s dressing to the 2012 Grammy awards as a Catholic Nun that sparked worldwide condemnations? So you see, its not onlu Muslims that frown at such appearances but Christians as well. 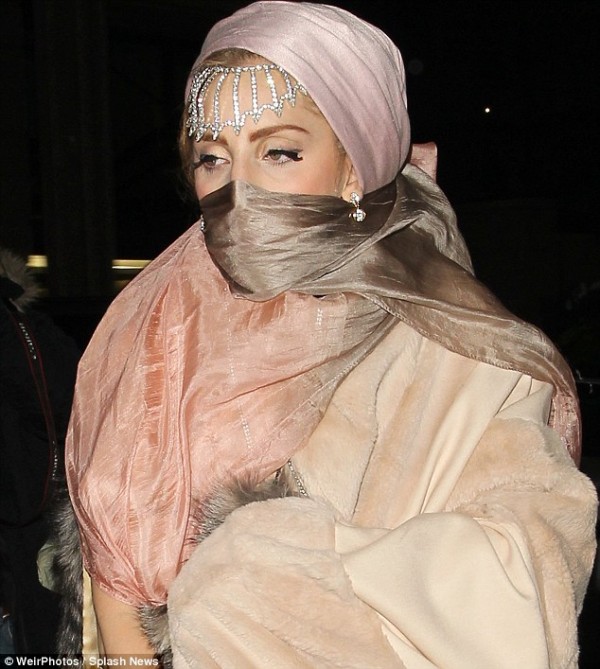