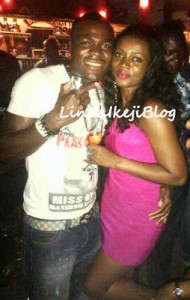 Talk about scoring a brace! A lot of Nigerian football fans are not happy with the performance of the country’s performance in recent times – on the football pitch, that is!

While our footballers might not be doing so well on the football pitch, they are definitely performing excellently well, off the pitch. Spartak Moscow of Russia and Super Eagles striker Emmanuel Emenike is not left out as far as scoring well off the pitch is concerned. He is presently scoring a brace in Nollywood.

The striker, LindaIkejiBlog has authoritatively claimed, is dating two Nigerian actresses. One of them is the very sexy fast rising actress Victoria Egbuchere (pictured on the left with Emmanuel in the picture) and the other one is controversial actress Nuella Njubigbo (picture below).

Nuella Njubigbo is said to be currently in Russia to see the 25-year-old “player” who she met not so long ago via a mutual friend. This same mutual friend was said to have been the one who introduced the footballer to Victoria, who got a promise ring from him and an invitation to Russia. So, Victoria, it has been reported, is also preparing to go see the “striker” in Russia in the coming weeks. Go for it boy, you can make it a hat-trick!