Acts of wickedness will never stop and so will God’s judgement upon wicked people never be averted. When the holy books warn about the dangers of engaging in pre-marital and extra-marital affairs, it is because the consequence of disobeying that injunction is usually costly. When you eagle-spread your legs and have s*x like it is the sweetest thing on earth and forget that those few minutes of pleasure could lead to a lifetime of regrets, you also forget that God is watching you, or you think He isn’t? Be deceiving yourself!

Again, less than a week after we brought you the story of a little baby whose corpse was found and subsequently recovered from a canal in Lagos state, another abandoned corpse of an obviously younger baby has been found- this time, at a dumpsite.

According to popular blogger Linda Ikeji, “this new born baby was found dead near a dump site at about 5:30 this morning at Sadiku Bus Stop, Ilasamaja, close to the Oshodi-Apapa Expressway”.

How can somebody commit this sort of grievous sin against self and God? May we learn to live right and have the fear of God always in all that we do. We cannot continue like this. Never! 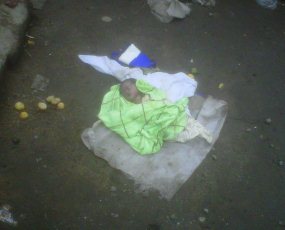 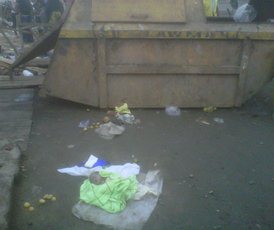