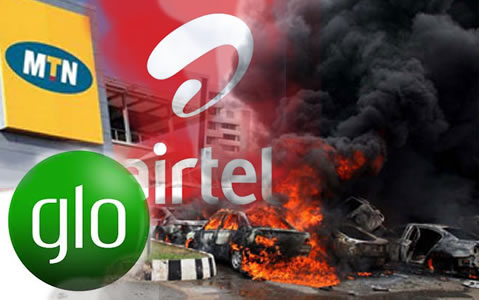 According to ALTON, the number of base stations vandalized in the north so far has been put at 26. Yet another base station belonging to an indigenous telecoms infrastructure company (IHS Nigeria) was bombed in Kano on Thursday, barely 24 hours after the attack on several base stations in Borno, Yobe, Bauchi and Gombe states.

According to the ALTON president, Gbenga Adebayo, an emergency meeting of the association’s executives had been called for today (Friday) to decide on what next to do. He says, “If it becomes impossible to continue to do business in the face of rising attacks on telecoms sites, operators will naturally suspend operations in the area… This is because beyond base stations, these elements may begin to target telecoms operators‘ offices and data centers among other key infrastructure. That is why it is important that the situation is curtailed before it gets to that point.”

Meanwhile, JTF in Borno State yesterday said terrorists’ attacks on telecom masts were designed to “disrupt” communication services and prevent residents from providing information on the activities of gunmen to the military and the police so that they can protect life and property.