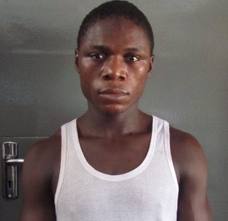 A 29-year-old HIV-positive man who sneaked into the house of a Chitungwiza music producer and ráped his wife as the husband was busy recording in another room was yesterday sentenced to an effective 16 years in prison.

The 28-year-old woman tested HIV negative after the rápe. Tawanda  (29) of the same town was convicted of unlawful entry, theft and rápe.

Tawanda denied the charges when he appeared before the regional magistrate, Ms Sarah Mupindu, but was convicted after overwhelming evidence against him. He was being represented by Mr Phillip of Mugiya Law Chambers.

Tawanda said he knew nothing about the case. But the woman said she was positive about the identification because the lights to her room were switched on when he entered. Ms Mupindu sentenced Tawanda to five years behind bars for unlawful entry and set aside two years for the next five years.

Another year was suspended on condition he restituted the complainant of US$580 before the end of December.
On the r*pe charge, Tawanda was slapped with a 17-year prison term, but had three years of his sentence set aside for good behaviour.

Ms Mupindu noted that Tawanda pre-planned the offence since he sneaked into the house during the early hours of the morning. ”You entered into the house knowing fully that people were fast asleep and you also benefited since most of the property stolen was never recovered,” said Ms Mupindu.

In addition, she said that it was the court’s jurisdiction to protect women and young girls from people like Tawanda.
Prosecutor Ms Concellia told the court that on September 23 last year, and about 3am , Chitungwiza, Tawanda and his unknown accomplices went to the house of the complainant.

The woman was fast asleep while her husband was recording music in a separate room. Tawanda forced open the door and stole cash amounting to US$580, a Samsung cellphone and various clothing items.
After that, he went inside the bedroom with his gang where he forced himself on the producer’s wife before they went away.The woman told her husband what had happened and they reported the matter to the police.