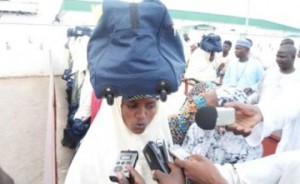 It is now clear that there is more than meets the eyes as far as the issue of deportation of Nigerian female pilgrims from the Holy Land is concerned. In defiance to the ultimatum given to it by the Nigerian government on the issue, the Saudi authorities have deported another 510 female pilgrims reports say. 171 had earlier been deported on Wednesday.

The authorities of Saudi Arabia are insisting that the women were unaccompanied by male relations which was considered against laid down rules of the kingdom. But there seems to be more to it. An interesting case as reported by Vanguard is that of the husband of one of the female deportees who returned home with his wife, in protest, when the Saudi Authorities refused to clear his wife, even after explaining that he was the husband of the woman.

According to highly placed sources at the National Hajj Commission, the return by the male pilgrim in question was an indication that there was more to the stance of the Saudi authorities than meets the eyes.

The source said: “On board of the plane bringing the women is also a male pilgrim. He decided to return home with his wife in protest when his explanations and entreaties to the fact that his wife was accompanied fell on deaf ears. That shows clearly that there is more to the issue than meets the eyes”.