I always thought TV show, ‘I didn’t know I was pregnant’ on Zone Reality was doctored, but it sure happens. You can be pregnant and not know.

A British soldier who did not realize she was pregnant has given birth to a baby boy at the Camp Bastion field hospital in Afghanistan. 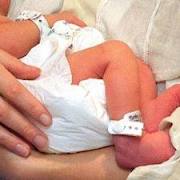 The Ministry of Defence (MOD) in London said mother and baby were in stable condition and a specialist “Paediatric Retrieval Team” would fly out from Britain to care for them during the long flight home.

“It is not military policy to allow servicewomen to deploy on operations if they are pregnant. In this instance, the MOD was unaware of her pregnancy,” the ministry said.

According to The Daily Mail, the woman herself was unaware of the pregnancy. The Mail said the Royal Artillery gunner had conceived before her six-month stint in Afghanistan began. Her pre-deployment training included an eight mile march and five mile run. Her job in the field involved providing covering fire for troops fighting insurgents.

She was taken to the field hospital after complaining of stomach pains and was informed by doctors that she was about to have a baby.

Lieutenant Colonel Andrea Lewis, commanding officer of the field hospital, was quoted as saying “This is a unique occurrence, but my team is well-rehearsed in the unexpected and they adapted brilliantly to this situation. I am pleased to report the mother and baby are doing well and we are all delighted at the outcome.”