Home General News World news I have urinated on myself for 50 years due to Labour Ward...
Facebook
Twitter
WhatsApp 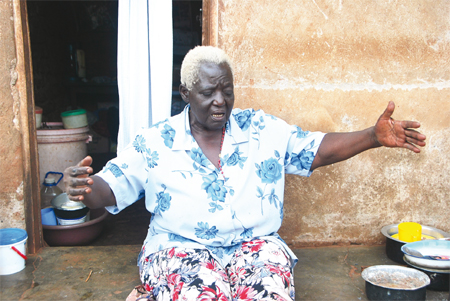 The medical mishap revelation came froma village a village path in Bugembe, Jinja district,Where Veronica Nandego’s one-roomed brick-and-sand house is. Although she does not remember her birth date, her facial features and cotton-white hair prominently state that she is in the league of 70 years plus.

It is coming to 5:00pm and she is seated on her verandah, thoughtfully, but feebly mingling millet bread, which doubles as her lunch and supper for the day. Years ago, she could easily recognise me and yell out my name, but this time she cannot for her sight is waning.

On close observation, the surface where she is seated looks wet and a few obstinate flies irritatingly buzz around her, intermittently disrupting the smooth flow of her meal.

It is the pungent smell of urine that has hovered around her for 50 years that the flies are interested in. For a period as long as this, Nandego has had to undergo agony, regret, self-rejection and stigmatisation as a result of a labour ward operation that went wrong, affecting her urinary functions.

he has had an uncontrollable urine flow, day and night, for the bigger part of her life. “It happened in 1962 during the birth of my third born, which was by C-section. I did not have a chance to see this baby. I was only told it was a boy. I was unconscious because the whole birth process was difficult due to unbearably long labour pains.

The doctors said I had a lot of water in the womb, which had to be removed. This was the most painful experience of my life. I was operated on in Jinja Hospital. It is from here that my 50 years of gloom started,” she recalls.

Nandego was later referred to Mulago Hospital, where she was operated on to stop giving birth — any other attempt to give birth, according to the doctors, would smother her life.

“I knew that marked the end of my attempt at motherhood. I was quite unmoved by it because I felt I had reached the ceiling of disillusionment and self-rejection. I was stinking and it was an inescapable reality.

Some of the women facing a similar problem in Ward 5C in Mulago actually committed suicide. They could not stand the leaking — they would break down and cry,” she says.

“I could not kill myself because I always feared that God would one day ask me why I destroyed my life. So I decided to suffer until the end,” Nandego adds.

All alone
Losing her third child hit her at the deepest point of grief because she had lost her second born shortly before, who was also by C-section, following complications that emanated from an accidental injection into his spinal cord.

Unfortunately still, the real salt in the wounds of her loss was rubbed hard when her first born, who was now her remaining thread of hope, eventually died in 1966.

Her father had forcefully taken her away from Nandego, despite her pleas to let the child live with the missionary sisters, who wanted to pay her school fees and nurture her into religious life. As fate would have it, he took her to live with his mother, who was in the process of marrying another woman’s husband.

“Gripped by jealousy and a false sense of fear, the other woman inadvertently poisoned my daughter, instead of mother-in-law. She developed a swollen stomach which eventually burst,” she says with her eyes cast down in painful reflection.

This marked the genesis of Nandego’s lone and uncertain journey in life — a journey with no child to turn to, love or share with moments of difficulty or joy.

Sadly, no eventful relationship progressed on between her and the fathers of her children. The men, who she says she heard passed on, abandoned her.

Public humiliation
“One time I went to church little knowing that I had not padded myself well. I realised the congregation was uncomfortable and murmuring — I had left a trail of urine in the aisle. I tell you, I felt so inadequate and worthless.

Worse still, sometimes, especially in church, I hear people complain that there is urine smelling around. And whenever they realise that I am the inconvenience, they laugh or smile surprisingly.

This saddens me the more. In my heart, I wish they would not laugh because mine is an incapacitation I did not call for, but a result of probably criminal negligence by the medics.

Honestly, people must not laugh at misfortune because everyone is a potential victim,” she counsels. Painfully, Nandego has not only withstood the stench, but also wounds on her thighs due to the continued burning effect of urine.

Some urine, she says, trickles from the navel, burning her big-size breasts, especially when she is seated. “Cockroaches and other urine-friendly insects attack me, especially in the night. The back and arms hurt me a lot.
I just crawl to and from the house or sometimes I just get support from the walls. Before I lost strength, I used to sell some waragi. I later got a casual job at the Jinja district local government offices as a garden attendant,” she says.

Notably, Nandego has not only battled the inconveniences of urine flow, but an accumulation of age and weight-related diseases that have, over the years, devoured her energy and subsequently changed her view of life.

Pessimism seems to be getting the better of her, fuelled by her increasing inability to go to church. “I do not have a mattress and bed sheets.

I now have rags to sleep on. The mattresses cannot be maintained for long. I need a liquid proof mattress that does not absorb urine. I also really need food since I am too weak to work now. Also, I have been told that there is a place in Masaka where I can get healed through prayer.

However, I do not have the transport fare and upkeep money while there. Let people of good will help me please,” she appeals.