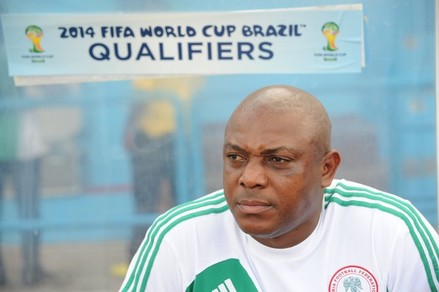 Shortly after the visit of President Goodluck Jonathan to the Super Eagles’ camp in Abuja, ahead of their qualifying game against Liberia, the Super Eagles coach, Stephen Keshi, has said he will quit his job if he fails to qualify the country to next year’s Africa Cup of Nations.

It will be recalled the Eagles failed to qualify for the 2012 Nations Cup and coach Samson Siasia was sacked as a result when he failed to resign. However, Keshi has vowed he will not be asked to go should his team again fail at the last hurdle to reach the Nations Cup tournament proper. According to him, “If I fail, I won’t wait to be asked to go. I will throw in the towel and move on.

“But God forbid that we get to a stage where we do not qualify. My boys are focussed and I am sure they also want to be in South Africa after they failed to get to the last competition in Gabon and Equatorial Guinea… But football can be unpredictable and that is why we have to redouble our efforts to ensure we qualify.”

The Eagles will face the Lone Star of Liberia in a two-legged qualifying fixture beginning on Saturday in Monrovia for a place at the 2013 Nations Cup in South Africa. The second legged is billed for Calabar.