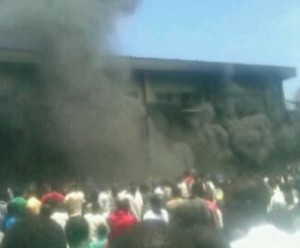 Igbo traders, especially the spare parts dealers who are mainly of Igbo extraction in Bauchi State have temporarily closed their businesses. This is as a result of Sunday’s suicide attack at St John Catholic Church, Bauchi where three people were killed and many critically injured. The move was in order to mourn the victims of the bomb attack.

According to Vanguard Newspapers which monitored the situation, nearly all the shops were closed, thereby leaving many streets looking deserted. Leader of the auto spare parts dealer in the state said they had to close shop to honour those killed and injured in the bomb blast.

In his words, “It is a very painful experience and we felt since they are a part of us we should show our solidarity to their bereaved and grieving families. We are closing pour shops for the day.”

Meanwhile, relatives of some of the victims of the attacks have expressed disappointment with the presidency and the state government over their inability to address the security challenge in the country and in the state. One Mr Paul Onwe from Ohukwu in Ebonyi State, husband to one of the victims, said, “I feel the pain seriously. That day after church she was going for visitation with her friend. They were waiting for KAKE NAPEP when the bomber struck… I went everywhere looking for her until I saw her corpse in the mortuary. Let the president and even the governor resign if they cannot protect the lives of innocent citizens.”