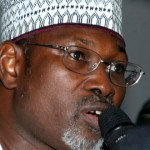 In a move which, it is hoped, will help check the occurrences of electoral malpractices in the 2015 general elections, the Chairman of the Independent National Electoral Commission (INEC), Prof. Attahiru Jega on Wednesday announced the commencement of the printing of 40 million permanent voters’ cards. Prof. Jega, made this known in Abuja, when he met participants at the international training seminar on national security organised by the Defence Intelligence School, Abuja.

According to Jega, the cards were part of the 70.5 million cards being planned by the commission, pointing out that the balance of 30.5 million cards would be ready by 2013. INEC has been working round the clock to ensure the success of the project, he said.

In his words, “We have gone very far, we are producing the first batch which is about 40 million of the 73.5 million voters who have been registered.” The INEC chairman said that by the end of 2013, every registered voter in the country, would have been provided with permanent voter’s card to enable them vote in the 2015 general elections.