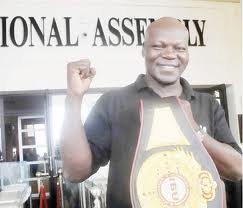 Nigeria’s boxing legend and world’s boxing champion, Bash Ali was present at the FCT Town Hall meeting on Good Governance, a tour organized by information minister, Labaran Maku yesterday and seized the opportunity to express his disappointment at the Government’s refusal to support his bid to rewrite history through his title fight; a fight he said would yield up to $500m in revenue for Nigeria.

Since 2005, Bashiru Ali has been trying to actualize his dream of becoming the oldest boxer to win a title through the Guinness Book of World Record fight.

He also expressed his displeasure at having to beg before being allowed to talk. He asked sadly, “Is this how you treat your national heroes?” Bash Ali said he had no other country and the country has to support him.

The FCT minister, Bala Mohammed therefore promised Bash Ali he would meet with him on Thursday to discuss how to forward the issue to the presidency.