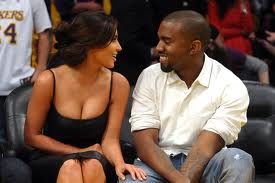 Kanye West has always been obsessed with Kim Kardashian. Way back in 2009, he publicly declared his love for her even while she was still with her ex, Reggie Bush, but the world didn’t pay attention.

Sources extremely close to Kanye confirmed that the rapper wrote several lyrics confessing his love for Kim Kardashian in the 2009 hit, Knock You Down, indirectly referring to Kim and her then NFL star boyfriend. The words exactly; “You was always the cheerleader of my dreams… To seem to only date the head of football teams… And I was the class clown that always kept you laughing… We were never meant to be, baby we just happened.” Later in the song, Kanye says, “You should leave your boyfriend now.” Apparently, Kanye has been lovelorn for years before he finally got his heart’s desire, as the source said that was just one of several lyrics referring to Kim.

He was also reported to have pulled out of MTV Video Music Awards because Kim could not attend. True love never dies, they say.