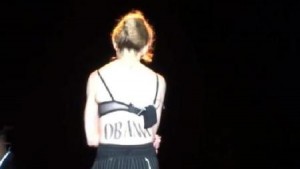 While Nicki Minaj chose to look the other way, Madonna takes her support of President Obama very seriously. So much so she had his name tattooed on her back. The pop icon showed it off on September 6, live at Yankee Stadium.

As Obama delivered his nomination acceptance speech at the Democratic National Convention in Charlotte, N.C., Madonna clearly had him on her mind.

“I’ve seen people being locked up and put in jail for speaking their minds, for being gay, for not practicing the right religion, for not dressing the proper way.”

“Yeah, it’s scary. It doesn’t mean that this is the perfect country. We have a long way to go. But what it made me realize is how lucky I am to be living here in America.”

There is always so much talk when celebrities bear their mind on issues, as if they are not part of us. However, it seems they care less what people say nowadays. Let’s wait and see who else talks.