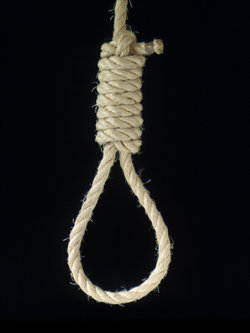 Ekanem Aniefiok, a 36-year-old Nigerian man, was on Tuesday arraigned before the Karu Magistrates’ Court for alleged attempt to commit suicide. According to police Prosecutor, Umar Mohammed, Aniefiok, who resides at the Federal Housing Authority Estate, Karu, Abuja, committed the offence on September 4 at 10am. He said the offence was contrary to section 75 of the penal code law.

According to Mohammed, the police was alerted by one Idika Uzoma, of the same address, that the accused had attempted suicide. He continued that Uzoma had discovered Aniefiok hanging in his room while his 20-month old daughter was holding a part of the rope that went through the ceiling.

Mohammed said that the accused was unconscious while the baby was crying, and that Uzoma raised alarm which attracted neighbours who rescued him. The prosecution said that Aniefiok had confessed to committing the offence because he lost his job and that his wife had abandoned him.

Meanwhile, Magistrate Celestine Odo said the court had no jurisdiction to try the accused and advised the prosecutor to refer the case to the appropriate court of competent jurisdiction.