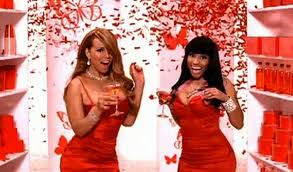 When Mariah Carey and Nicki Minaj were drafted as judges on American Idols, the world greeted it with unanimous acceptance and great expectation, but early into the show the duo didn’t want to see eye to eye.

Nicki Minaj reportedly arrived 45 minutes late, and Mariah Carey criticized her. Nicki wouldn’t take any of that and she fired right back.

They’ve reportedly buried the hatchet on monday as they believe a feud between the judges wouldn’t be good for the show. They were seen walking hand-in-hand down the hall smiling. As much as their truce should be a good thing, TMZ seems to think otherwise. Is a feud between judges good for any show? Wouldn’t they need to agree on some decisions?