Nicki smiles as Mariah speaks about the issue. “There was no feud. A few takes longer than a two days.” She said the show is all about music, laughter and fun. 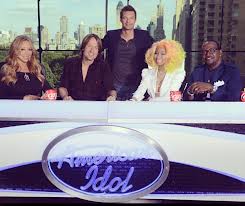 You’d recall there were reports of a feud between the two American Idols judges which was later reportedly settled as a truce was called for the sake of the show. Now, Mariah says there was never a feud.