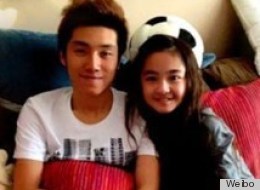 A  24-year old pop star from China, Mikizhang Muyi, made some electrifying newss recently when he publicly declared his love for Akama Miki, a 12-year-old Canadian-based child model.
The rumor of their relationship has been flying about for a while now, but it seem seem to be something like legit after Muyi left a romantic message for Miki on her Sina Weibo, a social networking site, right after her 12th birthday.
“Wait until I’m old enough to marry you, and then I’m going to say ‘I do,’” Miki wrote on Muyi’s Weibo page, where she has 500,000 followers, just after her 12th birthday. “I simply can’t wait for these next four birthdays of yours to pass, I’m counting down each one,” he wrote back.
It was reported that Muyi and Miki have been acquainted for some time, as Muyi became Miki’s music coach when she was 8. They’ve recorded duets together and flood their social networking profiles with pictures of the two of them. A year after hiring Muyi, Miki won the 2009 National New Silk Road Modeling Competition’s Children Pageant.
The pair trended on Twitter as news of their apparent romance spread as more and more people read their sappy public messages, and Muyi responded to the rumors on his Weibo: “There’s nothing we can do about this, nor do we feel the need to prove anything to these people. All we can do is continue to persevere with our love, our life, and being together.”