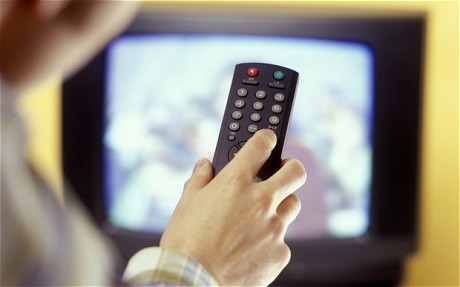 Anyone who spends six hours a day in front of the box is at risk of dying five years sooner than those who enjoy more active pastimes, it is claimed.
Researchers say that watching too much TV is as dangerous as smoking or being overweight, and that the “ubiquitous sedentary behaviour” should be seen as a “public health problem”.

Experts from the University of Queensland, Australia, write: “TV viewing time may have adverse health consequences that rival those of lack of physical activity, obesity and smoking; every single hour of TV viewed may shorten life by as much as 22 minutes.”

Referring to Australian and American guidelines that suggest children should spend no more than two hours a day in front of a screen, the academics conclude: “With further corroborative evidence, a public health case could be made that adults also need to limit the time spent watching TV.”

Although health campaigners – and parents – have long warned of the dangers of watching too much television, its effects on life expectancy have never before been calculated.In a paper published in the British Journal of Sports Medicine, Dr J Lennert Veerman and colleagues looked at the results of a survey of 11,247 Australians taken in 1999-2000, which asked about time spent watching TV, and also mortality figures for the country.They constructed a model in which they compared life expectancy for adults who watch TV to those who did not, and worked out that every hour spent glued to the screen shortened life by 21.8 minutes.

For those in the top 1 per cent of the population who watch six hours of programmes a day, they “can expect to live 4.8 years less than a person who does not watch TV”.

The researchers say that watching TV is among the most common forms of sedentary behaviour, along with sitting in cars.”Because TV viewing is a ubiquitous behaviour that occupies significant portions of adults” leisure time, its effects are significant for overall population health.”

“That’s why the UK’s Chief Medical Officers recently updated their advice on physical activity to be more flexible, right from babyhood to adult life.

“Adults, for example, can get their 150 minutes of activity a week in sessions of 10 minutes or more and for the first time we have provided guidelines on reducing sedentary time.

“We hope these studies will help more people realise that there are many ways to get exercise – activities like walking at a good pace or digging the garden over can count too.”

Maureen Talbot, senior cardiac nurse at the British Heart Foundation, said: “Sedentary behaviour such as vegging in front of the TV is practically a cultural institution these days and it’s good to relax for a while, but this study supports the view that too much of it can be bad for our health.

“Many of us make a conscious decision not to smoke because we know it’s bad for us, and this study suggests that more of us should make the same kind of pledge about lounging around and watching lots of TV.

“Introducing more activity to our daily lives, whether it’s walking to the shops instead of taking the bus, using the stairs instead of the lift or taking up active hobbies like sport or gardening mean we won’t spend as much time in front of the TV where we are likely to pile on the pounds.”