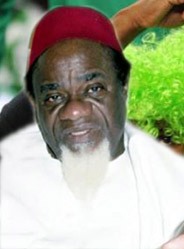 Elder statesman and former governor of Anambra State, Dr Chukwuemeka Ezeife in an interview granted to Vanguard recently in Abuja examines the journey of the country so far as we clock 52 years in a couple of days; he seems to believe that an Igbo president is the only way forward for the country at this stage.

Ezeife laments about the country’s socio-economic and political development in the 52 years and he concludes that the various tribes/nationalities and other social forces in the country must try to salvage what is left of the country this time around or forget about its future.

On the issue of insecurity, while he asserts that it is a common factor all over the world, he thinks the issue of Boko Haram is a peculiar one which has some political undertone. In his words, “But when you talk about Boko Haram, it has several dimensions. For instance, those who said they would make the country ungovernable for President Goodluck Jonathan if he won last year’s election have exploited Boko Haram.”

However, the highlight of the interview seems to be his stance on an Igbo presidency for the country. According to ezeife, “I wish to state that those who think that they are punishing the Igbos by keeping them out of power are deceiving themselves. It is Nigeria that needs and Igbo President for this country to move forward. Infact, until Nigeria produces an Igbo man as President, this country is going nowhere in terms of progress. Igbos are number one agents of development wherever they may be. They are known for transforming their environment.”