Michael Owusu Addo better known as Sarkodie, is no new comer to the rap game  especially in his native country, Ghana. Having won the BET ‘Best African Act’ award with Nigeria’s Wizkid in July 2012, the rapper has added another feather to his cap as he has been named in the 2012 edition of the acclaimed BET Awards.

Sarkodie is profiled alongside other 42 US based rappers including rap heads like Snoop Lion, DMX, T.I, and Talib Kweli. Others include Eve, Xzibit, E40 and Wu-tang impressario, RZA.  In this regards, Sarkodie is the only African act that makes the cut. Whatever happened to Nigerian rappers? 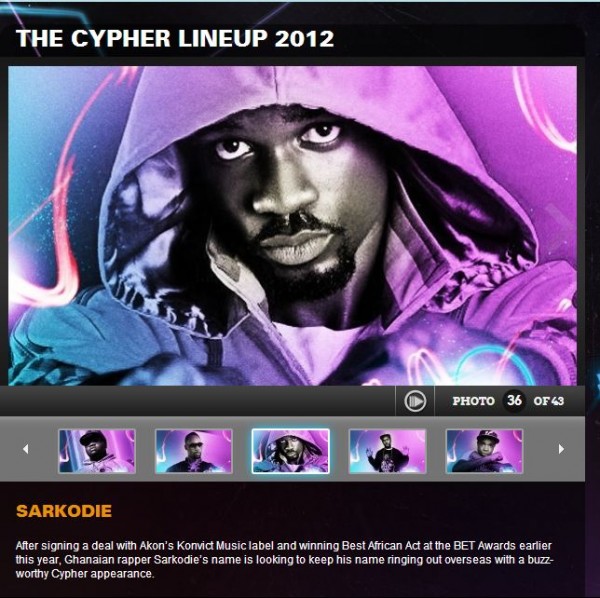 The cypher was aired at the BET Hiphop Awards show which took place on Saturday night September 29, 2012 in Atlanta. Sarkodie featured in the cypher hosted by legendary DJ Premiere.

In 2010, Sarkodie featured in the international version of the Cypher  along with D-Black, Kwaku-T, Ayigbe Edem, BabyG, Tinny and Reggie Rockstone.

Sarkodie is signed to the African subsidiary of Akon’s Konvict Music music label.