Simi Osomo flies to the UK from Nigeria six times a year to spend £5,000 a time on Crunchy Nut and clothes. Susannah Butter of the London Evening Standard reports on the influx of Nigerians to the UK and their phenomenal spending prowess, full article below: 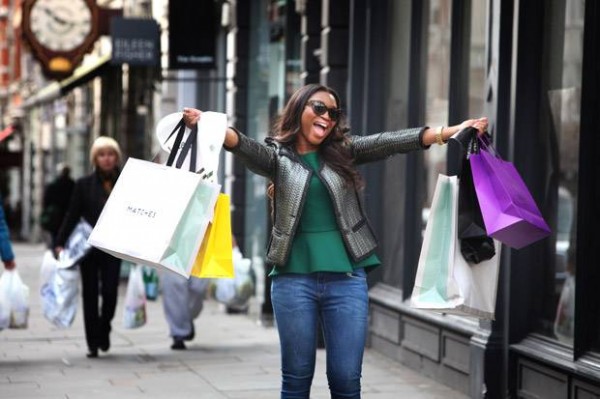 Every year, Simi Osomo makes six trips to London from Nigeria. The 25-year-old spends about two weeks here and every day she goes shopping. Today she’s at the boutique shop Matches Townhouse in Marylebone with a personal shopper. “When it comes to shopping and Nigerians, I can tell you it’s just what we have to do,” she tells me while admiring the patterned dresses.

For Nigerians, London is a shopping mecca. Visitors from the West African country are the UK’s fourth biggest foreign spenders, parting with an average of £500 in each luxury shop they visit — four times what UK shoppers typically spend. When I ask Osomo how much a two-week shopping trip in London costs she makes a bashful face. “Ooh, should I really be saying this? It depends, but most times about £5,000.”

Osomo is wearing a green top from Zara that’s “the colour of the Nigerian flag”, blue skinny jeans and new Christian Louboutin shoes. Later today she’s going to buy an iPhone 5 for her sister.

“You can get lots of things in Lagos but they are cheaper here and you get to take a holiday and relax a bit. It’s only six hours away.” The number of Nigerian visitors to the UK increased by more than 50 per cent to 142,000 a year between 1991 and 2011, according to the Office for National Statistics. Nigeria is projected to become Africa’s biggest economy by next year and the world’s fifth most populous country by 2050, and London is cashing in.

Debenhams’ Oxford Street branch has put up signs in Hausa, one of the official Nigerian languages, and said customers from this part of West Africa are its biggest overseas spenders. Yet Osomo says it’s not just rich Nigerians who come over. “Middle-class people can afford to come and spend £600 on shopping in a week here. What I like about the UK is that it doesn’t discriminate. As long as you’re able to prove you have an income, accommodation in London and a return ticket, the authorities are more than willing to give you a visa. It’s closer than America and the customer service here is phenomenal.”

Back home in Lagos, the technology market has been flooded with fake products from China, which means more people are coming to London for electronic goods and are even taking items back to sell. “No one wants to spend more than 100,000 naira (£390) and find out it is fake, so they prefer to come over for a holiday and buy something they know is real and has a guarantee in case something goes wrong.”

Marks & Spencer is one of Osomo’s favourite shops. “I love their fajitas. You can’t get them in Nigeria. I also buy soy sauce and Thai green curry paste, which is good because it lasts for a long time. Oh, and Crunchy Nut cereal, Skittles, Maltesers and tea. There’s nothing like a British cuppa. I get Lipton, PG and green tea.” She likes the variety of London. “I love Zara, H&M, Topshop. But if I want something more high end, there’s Sloane Street.”

More than £3 billion a year is spent on high-end goods in London, according to the London Luxury Quarter Report, and it predicts this will rise to £4.5 billion by 2020, with new shops including Burberry’s flagship fuelling the trend. Luxury concierge services are also popular. Osomo is a client of Quintessentially, which organises shopping trips and parties for her and has an office in Lagos.

Although summer is the height of the shopping season, Osomo likes to come back for the January sales too. Her mother, a lawyer, and father, a businessman, often join her. She has just finished a law degree and is about to start a job in fashion journalism, which she hopes will give her enough holidays for trips to London. But flights can get booked up quickly.

“You don’t want to get the Lagos to London flight in July. It’s packed with parents and their kids making noise.” Return flights at high season start at about £369.

But what about getting her haul of shopping back from London to Lagos? That, says Osomo, is costly. “All I pack when I come over is one pair of jeans and three tops. I bring two big suitcases but I always have to get another one and pay for excess baggage. I never learn.” British Airways has increased its excess baggage charge on flights from London to Lagos from £40 to £97 per suitcase in the past year. “They must have realised we always put an extra bag in and thought they’d try to make money out of it,” says Osomo.

Fashion-wise, she still picks up the odd item in Nigeria. Six months ago Zara opened an outlet store in Lagos, and Mango has been there for about a year. “Zara is affordable because it’s an outlet but what I find is that things are a bit last season. Nigeria’s hot all the time so there are always maxi dresses and swimwear but the colours are boring and we lack variety. Customer service is not great and some shops can get really crowded, which is challenging.” There is a burgeoning online shopping industry in Nigeria too. Currently, ASOS is the only shop that ships to Lagos free of charge and everyone Osomo’s age uses it.

“Nigeria is a fun place, I’d encourage people to go. Shopping is evolving. In five years I think a lot of stores will come to Nigeria because there is a gap in the market. Ten years ago I never thought Zara would come to Nigeria. I believe in the next five years we will catch up. But I still love London and won’t stop coming here.”