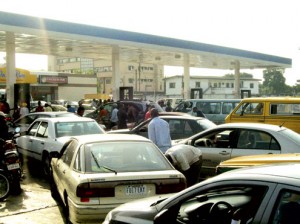 According to information put up on the site of the Nigerian Tribune, the price of petrol is now N120 per litre. This information, Tribune claim, is as a result of a random survey they conducted in some cities across the country.

The situation in Kaduna, Kwara, Kogi, Osun, Oyo, Ekiti, and Borno states, they claim, is even worse. It is noted that the sharp rise in price of the product ranged between 30 and 40 per cent in these states.

In Maiduguri, a litre sold at N110 in the few stations that dispensed the product to customers after spending many hours on long queues, while customers paid N100 bribe each to station attendants before they dispensed fuel at N110per litre into vehicles in Kwara State.

In Akure it was reported to be N130 per litre at the few stations that opened for business, while the NNPC Mega Station at Iworoko Road, Ado-Ekiti, experienced long queues that caused serious vehicular jams in the environs. The situation in Oyo State was similar as the commodity sold for between N110 and N130 per litre, and some station attendants have been accuse of extortion. Interestingly, they claimed that there was no sign of fuel scarcity in Lagos State, as the official price subsisted within and outside Lagos metropolis.

Meanwhile, as the scramble for the fuel continues in the affected states, black marketers are said to be having the time of their lives, selling to desperate customers at N130 per litre.