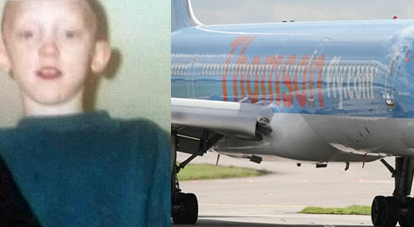 The world is seeing more of unbelievable things as UK mirror reports that a teenager was left behind in Portugal after he was thrown off a holiday flight for a furious mid-air fight with his step-dad.

Lee Doran, 17, was on his first trip abroad with half-brother Dylan, 14, stepfather David Laughton, 39, his partner Sarah Wilson, 28, and their son Harry, three, when he and David “rolled around the aisle” at 35,000ft.

The Thomson flight from Newcastle to Lanzarote had been in the air for more than three hours when the fracas forced the pilot to make an emergency landing in Porto.

The family was escorted off the plane and Lee was questioned by police.

While the rest of his party later boarded another plane to Lanzarote, Lee ended up outside the airport police station where he spent almost 24 hours without food or water.

He was finally taken in by embassy staff after making a frantic phone call to his mum Jannine Bird, 36, in London, who paid for him to fly home.

Unemployed carer Jannine, who is also mum to Dylan and spent eight years with David before they split, said yesterday she was still “in shock”.

She added: “To leave Lee by himself in a foreign country is just appalling.”

David, an asbestos worker from Hartlepool, Cleveland, is not due back from Lanzarote until next Thursday. He has known Lee and Dylan since they were babies and they have spent summers with him since the split. He said last night: “We were 50 minutes from landing and Lee pulled his hood up and I pulled it down.

“The next thing I knew he knew he had his arms around my neck and we ended up in the aisle.

“When we got off in Porto he wouldn’t take any money from me. As far as I knew he was with the police. Lee is 17 and lives on his own in London. This has been blown up out of proportion.”

David may be in for a shock when he returns – the airline may try to recoup some of the £35,000 bill for the emergency landing from him.

A Thomson spokesman said: “A party of passengers became disruptive and as a last resort the flight had to be diverted to Portugal. In this situation it is the party’s responsibility to organise onward travel arrangements.”