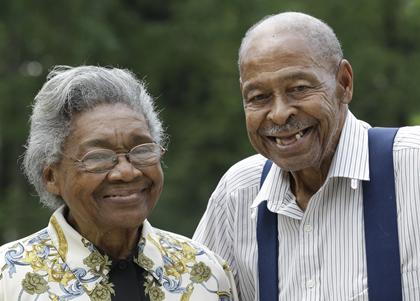 As teenagers Lena Henderson and Roland Davis  got married in Chattanooga, Tenn., during World War II. The 85-year-olds are getting together again in Buffalo, nearly 50 years after they divorced, according to Cupid’s news cherubs.

“I always thought it might happen,” Davis, a military vet whose second wife died in January, told the Buffalo News. “It was always in the back of my mind. We’re just thankful that we could get back together.”

“I think we just kept thinking about each other all the time, even though we were so far apart,” said Henderson, a widow after her second marriage.

After divorcing in 1964 — nobody is saying why — they kept in touch, even as Davis moved around the world. His new wife even used to call Henderson for advice. They last saw each other in 1996 at a family funeral.

“The way they would act to each other never indicated there was anything but a friendship between them,” their youngest daughter, Renita Chadwick, told the Buffalo paper. “My mother never had a harsh or contrary word to say about my dad, and my dad never had anything but loving remarks to make about my mother.”

“Every person I share this story with smiles, cries or laughs,” Chadwick said.

Davis proposed over the phone at Easter. He arrived in suburban West Seneca from Colorado Springs with an engagement ring “pinned to my T-shirt” so he wouldn’t lose it.

With four generations of family watching, including the four children they had while married, the forever lovers will re-tie the knot at a church, which they didn’t do as teens.

A reception will follow, but, once again, no honeymoon trip.

“You don’t think people are going to get married at this age,” he added. “”We’re just thankful we’ve lived this long and that we’re still here. We have a lot to be thankful for.”