Photo: Moustafa Ismail-The man with the largest biceps in the world 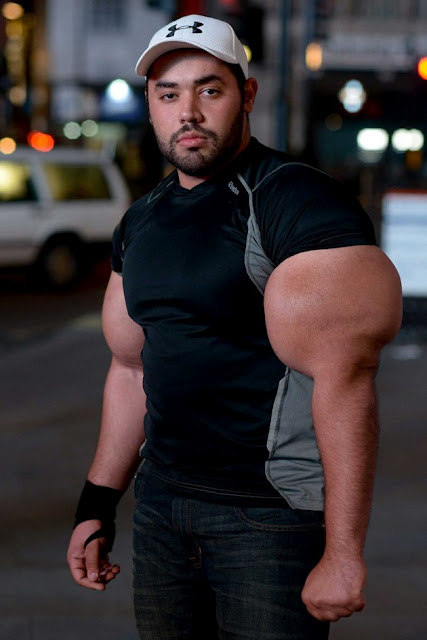 When one spends ten years pumping iron twice a day, one should expect a good result like what this man has gotten- upper arms with the same circumference as a grown man’s waist. With a massive 31 inch biceps,  31year old Moustafa Ismail has just been crowned the biggest biceps in the world.

“Big Mo” as he is fondly called eats as much as 3lbs of chicken, 1lbs of steak or fish and four cups of almonds washed down with two gallons of water and three litres of protein shakes.

Moustafa, who lives with his wife Carolina, 30, started bodybuilding ten years ago in a bid to keep fit.

But after hitting the gym he received hundreds of compliments on his bulging biceps and decided to concentrate all of his efforts on making them even bigger.

Five years ago, when he failed to win a place in the Egyptian bodybuilding team he swapped his home country for the USA.

He now trains at least twice a day and can lift an incredible 500lbs.

Moustafa admits to taking protein shakes to help with his bodybuilding but puts his bulging body down to genetics – his father was an Egyptian wrestler.

He has a daily exercise regime of 5am until 8am during which he concentrates on cardio, strength-training and body sculpting, using heavy and light isolated weights