Photos: Top-less Vïrgïns Celebrate Chastity And Unity As They Parade In Front Of Swazi King

Swaziland is a small landlocked country in southern Africa- ruled by the continent’s last absolute monarch. The reed dance which takes place yearly is the most well-known cultural event in the country and only childless, unmarried girls can take part. The aims of the ceremony are to preserve girls’ chastity, provide tribute labour for the Queen mother, and to encourage solidarity by working together. 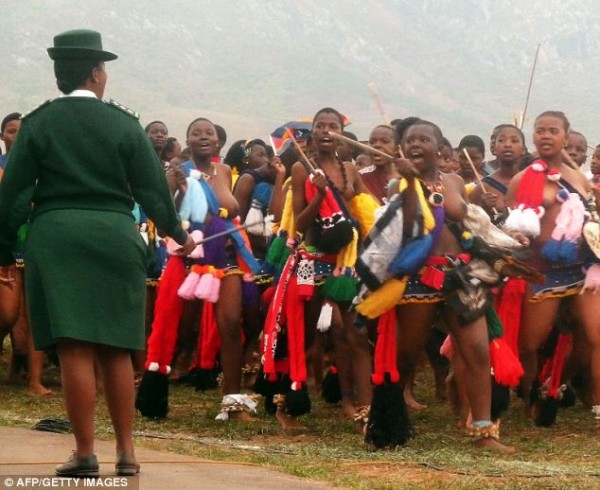 This year’s event as is with every other one, saw thousands of bare-breasted young Swazi women parade themselves in front of their king in a lavish ceremony. Dressed in beaded skirts, clutching machetes and mobile phones, women and girls danced and sang tributes to the king and queen mother – also known as the Great She-Elephant – in a traditional Umhlanga Reed Dance to celebrate womanhood and virgïnity.

In the past, the king has used the ceremony to choose a new wife, and some girls still hoped to catch the king’s eye. King Mswati III, who has at least a dozen wives and a personal fortune estimated at $200million, says polygamy is part of Swazi tradition and helps cement national unity.

In a country with the world’s highest rate of HIV/AIDS, maidens still flock in from across the country – some attend the ceremony every year until they marry.

It is a good thing that Swaziland can still boast of vïrgins and maidens are proud to display their chastity but, encouraging polygamy in this manner, is confounding. What’s your view?