I will try to catch some sleep once I am done posting this story and hope nightmares wont be my lot. Some of the people you are about to see will leave you wondering if they still have any trace of humanity left in them. Animals, if they had any sense of reason would prefer to be human yet, some humans don’t think they look good in human form and so prefer to modify their bodies to look like Animals of their choice. Others, prefer to pierce every patch of skin  while others adorn theirs with tattoos. In short, the people below range from the bizarre to the ridiculous to unimaginable.

1. Rick The Zombie Boy: The 27 year old Canadian artist and fashion model Rick Genest is also known as Zombie Boy for being tattooed like a corpse across the majority of his body. So far, more than 24 hours of tattoos –costing over $4,075 Canadian dollars– have got him halfway there and made him a minor celebrity on the internet. 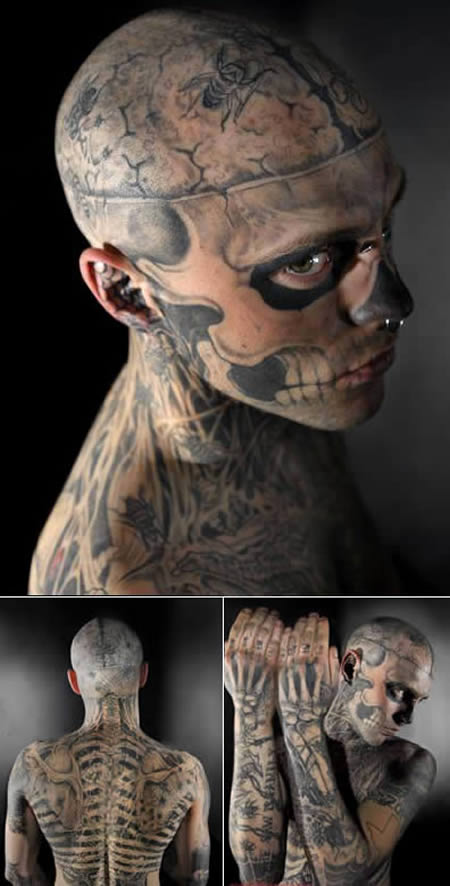 2. Dennis Avner The Catman: 54 year old Dennis Avner, also known by “Catman” or his native american name of “Stalking Cat”, has undergone incredible extensive surgery in order to look like his totem animal, the tiger. Modifications include extensive tattooing, trans-dermal implants to allow whiskers to be worn, sub-dermal implants to change the shape of the face and the filing and shaping of the teeth to make them look more like tiger’s. He currently holds the world record for the most body modifications. 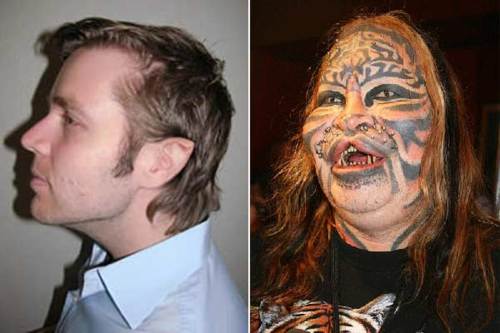 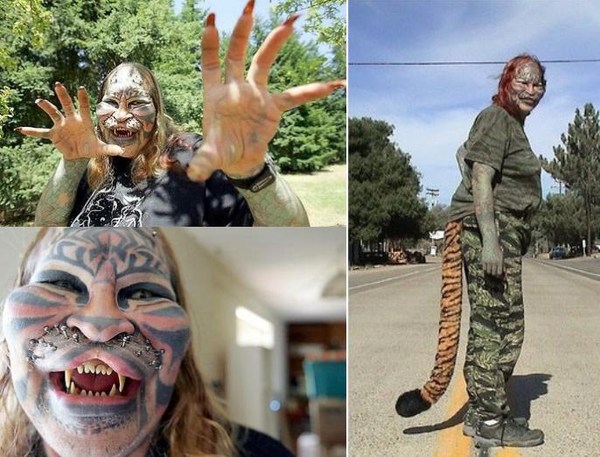 3. Julia Gnuse The Illustrated Lady: 53 year old Julia Gnuse, also known as the illustrated lady, developed a condition called porphyria in her mid 30’s causing her skin to blister regularly and ultimately scar. In order to cover this up, she started getting tattoos applied over the affected areas. After about 13 years, she has covered over 95% of her body, and holds the Guinness Record for being the most tattooed woman in the world. NB: the tattoos are purely aesthetic and have not in any way helped with the blistering. 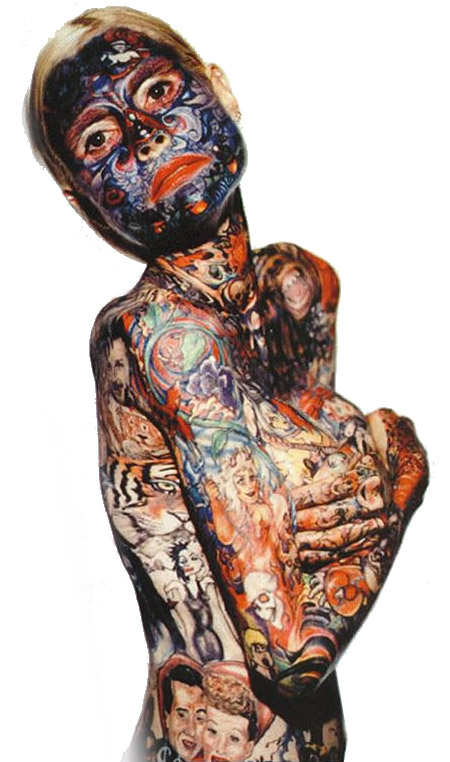 4. Tom Leppard The Leopard Man: Formerly the worlds most tattooed man, Tom Leppard now 76 years old is known worldwide as the Leopardman. He fled society years ago after spending £5,500 to have his body covered in leopard-like spots. Until 2008, He lived in a small cabin on the Isle of Skye, Scotland. He now spends the rest of his life solitarily in a terraced house on Broadford, scotland. 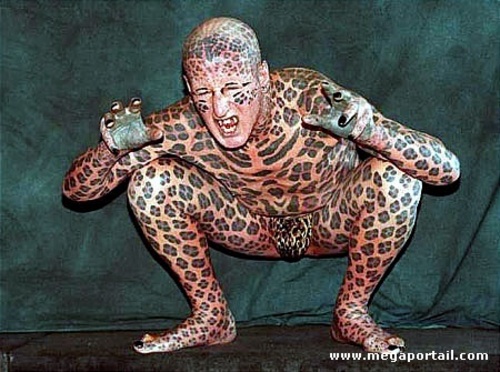 5. Erik Sprague The Lizard Man: 40 year old Erik Sprague is the Lizardman. He was one of the first people to have a split tongue and in some circles is seen to be wholly responsible for the recent popularity of this particular modification. He transformed himself into a reptile via 700 hours of tattooing, five Teflon horns implanted beneath the skin of his eyebrows, filing down of his teeth into sharp fangs, bifurcation of his tongue, stretching of his septum and earlobes, and recently, green-inked lips. There have been rumors of him hoping to get a tail transplant, however those have been debunked because according to Erik himself, it would be impossible. 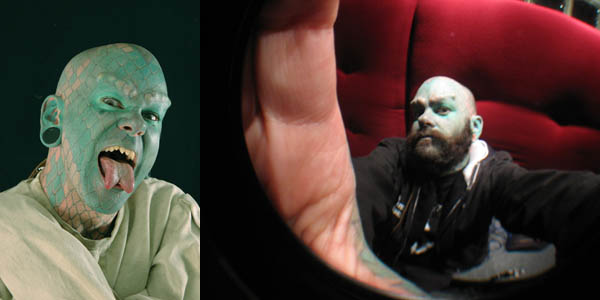 6. Horace Ridler The Zebra Man: A professional freak and sideshow performer, Horace Ridler exhibited himself as The Great Omi or The Zebra Man. Horace was an English aristocrat who returned from the First World War to Twenties’ London where he began his transformation into one of the world’s greatest oddities. Tattooed from head to foot in black and white stripes, he became Omni – the Zebra Man. As the years wore on the Omi’s appearance became more and more outrageous as did his personality. He took to wearing lipstick and nail polish and signed his pitch cards, ‘the Barbaric Beauty’. Despite his appearance, “underneath it all, I’m just an ordinary man,” he insisted shortly before his death in 1969.

7. Lucky Diamond Rich World’s Most Tattooed Person: The ultimate in multi-layered tattooing is represented by the chainsaw juggling, unicycling, sword-swallowing Lucky Diamond Rich from Australia, who has spent over 1,000 hours having his body modified by hundreds of tattoo artists. The 41 year old began by having a full collection of colourful designs from around the world tattooed over his entire body. But not content with stopping there, Lucky next opted for a 100% covering of black ink, including eyelids, the delicate skin between the toes, down into the ears, and even his gums. He is now being tattooed with white designs on top of the black, and coloured designs on top of the white! He is now, officially, the world’s most tattooed person, having a full body coverage. 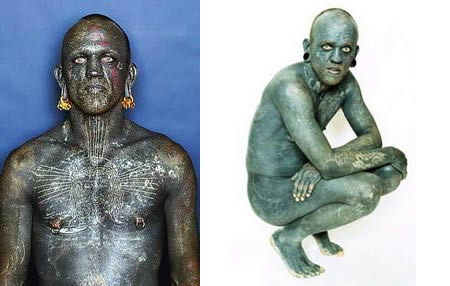 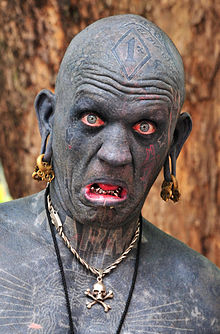 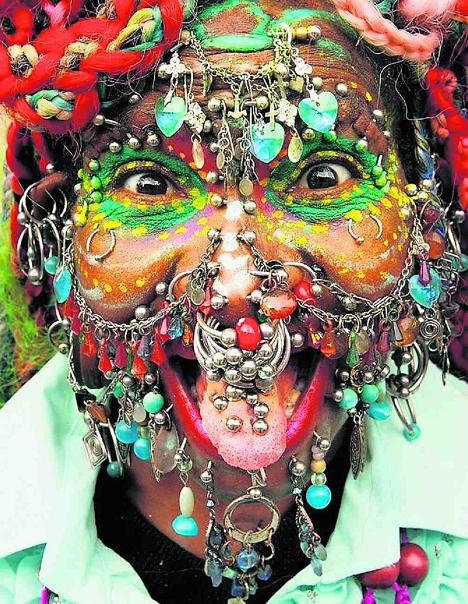 9. Tiger Lady, Enigma’s ex-wife: The Tiger Lady is the stage name of the heavily modified female German performance artist and tattoo artist Katzen, whose full body tattoo theme is that of a tiger. She received extensive tattooing on all parts of her body and wears tiger whiskers attached via piercings on her face. She was once married to “The Enigma”. They got divorced and now she works at a tattoo shop in Houston, Texas. 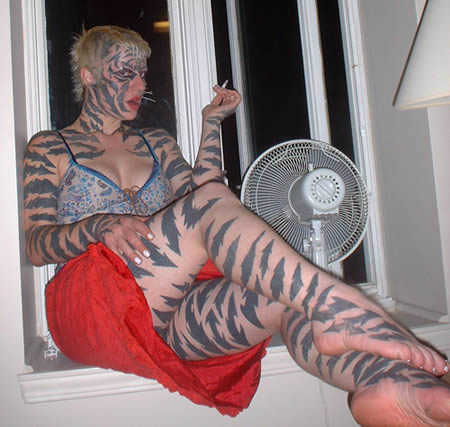 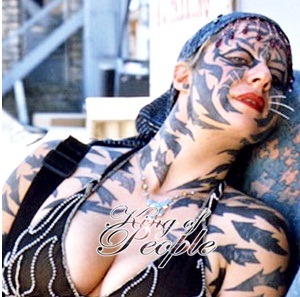 10. Kala Kawai The Horned Man: Kala Kawai owns studio of body modification in Hawaii. 75% of his body is covered with Tattoo and has 67 piercings. He holds the record for the world’s largest implanted horns. 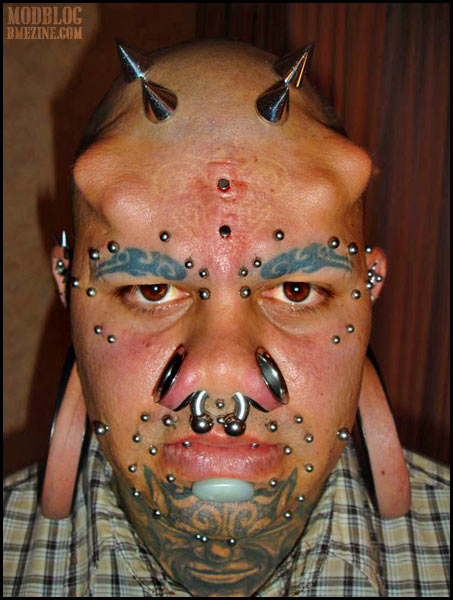