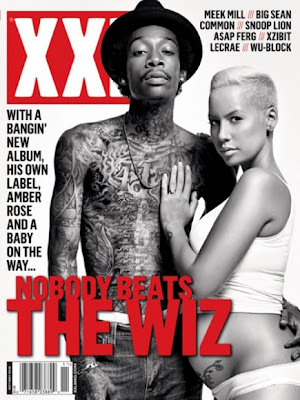 This are few excerpts from their XXLMag cover story below:

It’s a love thing between Wiz Khalifa and Amber Rose, hip-hop’s most publicly affectionate couple. And now they’ve got a baby on the way. The engaged and expecting item grace the cover of XXL’s October/November issue with a special interview by XXL editor-in-chief, Vanessa Satten, and revealing classic portraits by Sarah McColgan. In the story, Wiz and Amber speak openly on topics such as how they met, being a celebrity couple in hip-hop, their excitement about becoming parents and being in love, Wiz toning down his herbal habits around his pregnant fiancé, what family and friends think about their union and details on Wiz’s highly-anticipated sophomore album, O.N.I.F.C. [Only Ni**a In First Class].

Wiz On Getting Together With Amber:

“I love my baby. She’s gorgeous and it makes me look even cooler when I show how much I love her to other people… When I met Amber, she loved me for who I was. I had some money, but it was like to pay my bills and literally set myself up for a future. But I was wearing the same camo shorts and high-tops and Chucks. But she liked my swag and she liked me for who I was and I wasn’t afraid of that… She didn’t wanna date any entertainers or anybody in the business. She didn’t know who she wanted to be with, but she knew who she didn’t wanna be with.”

Wiz On Recording His New Album With Amber At Home:

“I just gotta do it. The most important thing is knowing that she is there and I have to tend to my babies. This is my first child ever in life. I gotta go hard at everything. As hard as I go in the studio, I gotta go just as hard taking care of my baby and making sure she’s alright, and I’m spending time with her and she doesn’t feel neglected.”

“I’m so ready. I’m going all-natural. I’ve decided that I’m going to have an all-natural water birth. No medicine. I want those bragging rights! The next time Wiz has a stomachache or anything, I’ll say, ‘I popped out a baby all-natural.’”