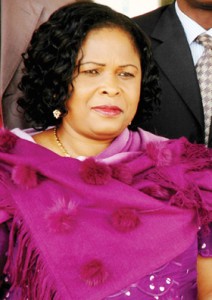 At least that is what the information from the presidency on the issues has said – the First Lady is in Germany to take a “moment’s rest”. What else would you expect from our “multitasking” First Lady? Or who thinks that combining the responsibilities of a First Lady and those of a permanent secretary is an easy feat? You will get fatigued if you were in her shoes!

Somebody asked “what is wrong with Obudu Cattle Ranch?” can’t the First Lady go and take her rest there? Well, the Presidency will get back to you on that. In fact right now, they are furious over how the news got leaked to the media in the first place. Why can’t Nigerians just mind their own business? That is how they started spreading rumours that the First Lady was undergoing treatment for food poisoning.

When you keep the people in the dark, they will pull you down, tugging at your clothes just trying to get directions. So much for the transparency with which the president promised to lead the country; not letting Nigerians know what exactly the business of the first lady is in Germany.