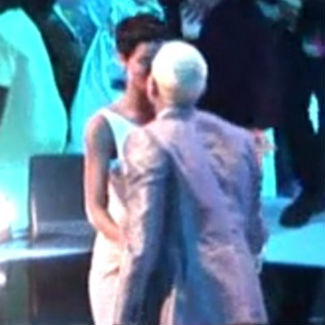 Rihanna and Chris Brown had a public kiss at the MTV Video Music Awards (VMAs) in Los Angeles last night (06.09.12).

The couple, who split in 2009 following Brown’s vicious assault on Rihanna prior to the Grammy Awards, were seen embracing after Rihanna scooped the award for Video of The Year for ‘We Found Love’.

Departing the stage, she was met by Brown who rose from his seat and planted a kiss on Rihanna’s lips. He then left his arm around her waist as she left to return to her seat.

Rihanna cofessed she still loves Brown during her much-hyped interview with Oprah Winfrey.

Rihanna herself picked up the biggest award of the night, Video of the Year, for ‘We Found Love’.