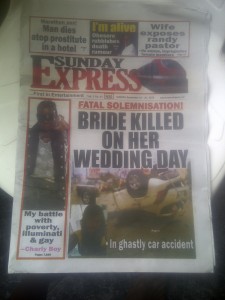 The day was bright, it was bright and fair. A happy day, a day of joy for Miss Bisioye Adegbite who was heading for the altar to say ‘I DO’ to his dream man.
After several months of preparations with family members and friends, little did Miss Adegbite know that she would never partake in the marital vows.

According to Sunday Express, efforts of the supposed bride were ended in a ghastly motor accident shortly after she left home in a convoy of exotic cars for her church wedding somewhere in Ikeja, Lagos.

Sunday Express gathered that the fatal accident that claimed the life of the bride happened on one of the major roads in Ikeja, in front of Tunde Motors.

“We were all shocked and terrified when we noticed a white Murano SUV decorated with an ‘About To Wed’ somersaulting that fateful Saturday morning. We didn’t know what actually caused the accident. But those who immediately rushed to the scene to rescue the survivors were shocked to find the bride dead. She died immediately the accident happened on the spot. In
fact, we were told that among the occupants of the car, she was the only one who died. They had to remove her wedding gown in order to be able to retrieve her body from the mangled car that was a complete wreck”, a close family member said.

According to the source, it was like a dream to the groom who was waiting anxiously for her arrival in order for them to begin the solemnization of their marriage in the church under the watchful eyes their family members, friends and well wishers only to be told that the love of his life had been hijacked by the icy hands of death. The man thought he was dreaming until he rushed to the hospital where he was shown the battered corpse of his darling bride by the doctor and broke down in tears uncontrollably.

The late Adegbite, 25 until her death was a final year student of Industrial Relation at the University of Cotonou, Benin Republic, she had since being interred.