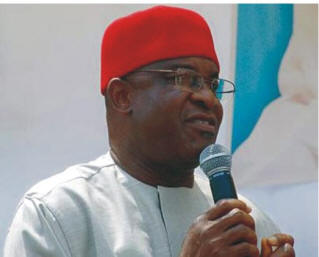 Speaking during his welcome address to the Senate after an eight-week recess, the Senate president, Senator David Mark touched on various issues concerning the country at the moment such as the economy and budget, poverty and insecurity, etc. H also observed that the country needs healing in order to come out of the web of crisis that has engulfed her in recent times.

However, from the sporting perspective, the senator did not hold anything back on what he feels about the recent performances of the country in sporting events, and the steps he feels should be taken to solve this particular problem. Below is an excerpt from his comments on this particular issue:

“Perhaps, no singular event reflects our current attitude to things, and exemplifies our decline, as the fiasco of Nigeria’s participation at the recently concluded 2012 London Summer Olympics. You will recall that our contingent failed to win a single medal in the games. Our fortunes are even more dismal in football, which is a national pastime, and a great unifying factor.

“This should not surprise you, after all, the National Stadium, Abuja, our supposed symbol of sporting excellence, was recently discovered to be decrepit, overtaken by weeds and reptiles”.

As for those in charge of sports administration in the country, Senator David Mark believes they should have resigned honorably or have been sacked. He then expressed his surprise that none of these has happened:

“What is surprising, and very worrisome, is that our psyche is beginning to accept this malady as normal. Ordinarily, such an appalling state of affairs ought to have been followed by voluntary resignations, or mass purges. But nobody has resigned, and nobody has been fired! Distinguished colleagues, there is no doubt that a drastic overhaul of our sports administration is long overdue.”

Somebody should please tell the Senate President that Nigerians are not feeling the positive impacts of the Senate as well; and Nigerians are also surprised that there have not been any Senate members stepping down.