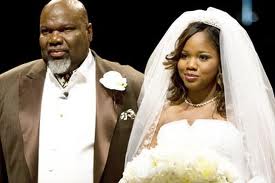 The youngest daughter of mega pastor Bishop T.D. Jakes has released a statement announcing that she is ending her four year marriage.

In her statement announcing the divorce she writes:
“I have built my ministry and identity around being the best wife and a mother I can be. For quite sometime I have tried to steer through some serious troubles at home. As much as I wanted my marriage to last, it cannot.

After professional counselling, and prayerful consideration I have decided to end my four-year marriage. There are biblical grounds supporting this decision and I have attempted every other recourse but after multiple infractions over the course of the union, and for my personal safety and that of my children, I have come to this painful decision.

Now that it is made, I would ask for privacy while I navigate through this difficult season in my life so that I may now concentrate on being the best parent for my children possible. Thank you for your prayers.”

It was gathered that Sarah married Robert Henson in a very extravagant wedding ceremony in 2008. At the time, Robert Henson was a student at Texas Christian University. He is a former linebacker for the Washington Redskins.

Sarah was only 19 years old when the couple were married.