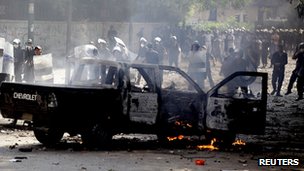 US missions are on high alert across the Muslim world as anger grows over a film made in the US that mocks Islam.

More anti-American demonstrations are expected after prayers on Friday.

Jeremy Bowen, BBC Middle East editor has this to say:

The demonstrations, and violence, which have spread through the Middle East and North Africa are a reminder that, in this part of the world, religion and politics are often the same thing. Religion defines lives and is part of people’s identities in a way that secular Europeans forgot long ago.

It is a big part of the political transformation that has been happening since the Arab uprisings started last year. In the old Middle East, there used to be protests against the United States and its Western allies when they were perceived to be attacking Islam – everything from insulting the Prophet Muhammad to invading or bombing.

The authoritarian rulers of police states who depended on western support always kept them in check. But now the old red lines have gone.